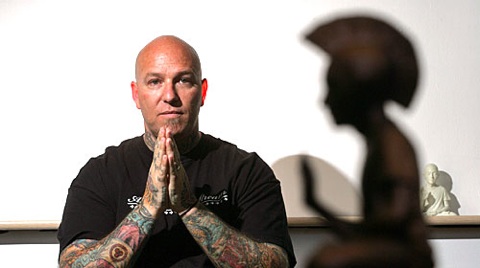 This week on The One You Feed we have Noah Levine.

We were lucky enough to sit down with Noah in the Against the Stream headquarters in Los Angeles. Noah’s teachings are core to everything that I have come to believe over the years. I’m really excited to present this interview.

Noah Levine (born 1971) is an American Buddhist teacher and the author of the books Dharma Punx: A Memoir , Against the Stream,  and The Heart of The Revolution. As a counselor known for his philosophical alignment with Buddhism and punk ideology, he founded Against the Stream Buddhist Meditation Society.

As a youth, Levine was incarcerated several times. His first book, Dharma Punx, details teenage years filled with drugs, violence, and multiple suicide attempts—choices fuelled by disillusionment with American mainstream culture. His substance abuse started early in life—at age six he began smoking marijuana—and finally ended in a padded detoxification cell in juvenile prison 11 years later. It was in this cell where he hit “an emotional rock bottom” and began his Buddhist practice “out of a place of extreme drug addiction and violence”.

He recently started Refuge Recovery which is a community of people who are using the practices of mindfulness, compassion, forgiveness and generosity to heal the pain and suffering that addiction has caused. His new book is titled Refuge Recovery: A Buddhist Path to Recovery from Addiction.

In This Interview Noah and I Discuss…

Against the Stream homepage

Against the Stream audio archives