If there is only one skill to learn that would bring the most peace in life, it would be to learn only to worry about things you can control.

This wisdom is echoed in two well known teachings. The first is the classic Serenity Prayer which has been adopted by Alcoholics Anonymous as a semi-official prayer. I’m sure you have seen these words before:

This is only a part of a longer prayer by Reinhold Niebuhr. It first appeared sometime around 1943 in his sermons but wasn’t published until 1951.

The second teaching is from a more secular source. Stephen R Covey’ s (although Stephen R Covey was a devout Mormon his writings were essentially secular) bestseller The Seven Habits of Highly Effective People .

Covey says that instead of reacting to or worrying about conditions over which you have little or no control, you focus your time and energy on things you can control. If we look we will find that the problems, challenges, and opportunities we face fall into two areas–Circle of Concern and Circle of Influence. 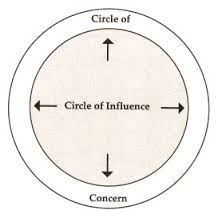 The Circle of Concern is all of the things in the world that concern us. This can be anything from how our children are doing to how children in Africa are doing. For some of us, this circle is really big and overwhelming.

The smaller circle in the middle is our Circle of Influence. These are things that we can make an impact upon.

Why? Because as Leo Buscaglia says:

Worry never robs tomorrow of its sorrow; it only saps today of its joy.

Our fatigue is often caused, not by work, but by worry, frustration and resentment.

Worrying exhausts us and takes away the strength and energy we could be applying to our Circle of Influence.

We think that worry does something useful for us, that it reminds us what needs to get done, or it motivates us. But the truth is: worry wears on us; it doesn’t work for us. It steals energy, life and damages relationships.

So far so good but how do we know what falls into each circle? This is the wisdom that for which the Serenity Prayer asks. It is one of the best types of wisdom to have for a life of peace and a life of impact.

A useful way of determining which Circle your concerns are in is by listening to the language you use. You can distinguish between the use of the words “have” and “be”. Your Circle of Concern is full of “have’s” while your Circle of Influence is full of “be’s”.

However, if it were this easy, there would not be an enormously popular prayer asking for the wisdom to tell the two apart. There are a lot of things that fall in the middle. There are decisions to be made, there are options to pick from, there are situations that are grayer.

But if we don’t squander our energy worrying about the things that are clearly beyond our control then we have more energy and power to make the right choice when things are not as clear.

Worry drains the mind of its power and, sooner or later, it injures the soul”

Another great way when you are unsure is to ask other people what they think.

2. The best way to get peace is to focus on what you can control

3. We can observe our language to help us understand whether something